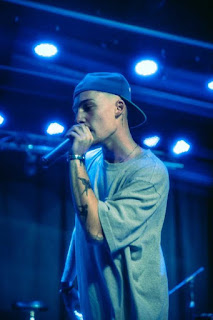 Ryan Bauer is a 20-year-old singer/producer/and engineer born in Upstate NY. Ryan has been influenced by music. His father being an avid local musician, and his mother being a great singer, he had no choice but to be around music. Growing up Ryan’s favorite genre of music was rock n roll.

And so he is again back with a bang, we’ve literally spent the day with his music, especially his latest release: “Argue”.

From the first seconds, it gave us a dose of motivation, thanks to pleasant soundscapes and mesmerizing sonorities between the cinematic atmosphere and the buzzing guitar tunes.

The new record from Bauer is a single that is melodic & fueled with a dynamic instrument range. Ryan always infuses his smooth voice with hip-hop accents which give just enough edge to balance the mood in any environment. Bauer is a definite go too artist for almost any music fan.
The perfect vibe for fall. Although it has a pure Hip-hop touch to it with his contemporary vocals sounds and melodic flow, most of  Ryan’s single has this unique vibe to it which makes his music stands out from his peer.
Play now: